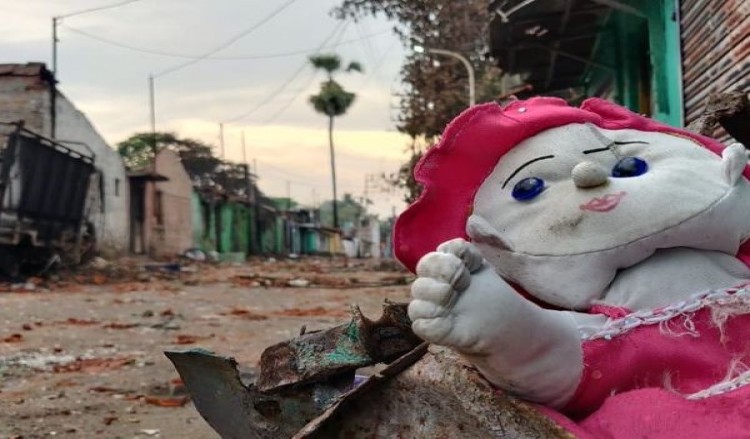 Some communal incidents occurred on 10th and 12th   May 2020 in Telenipara under the jurisdiction of Bhadraswar P.S, one of the known industrial areas of the Hooghly district. The   area has a mixed population comprising Bengali Hindus residing there before the establishment of jute mills and non- Bengalis, both Hindus and Muslims, mainly from Bihar, U.P and Andhra Pradesh, started pouring in, brought there as labourers of jute mills around the western bank of river Ganga. There are two jute mills, namely Victoria Jute Mill and Shyamnagar North Jute Mill in Telenipara with some other Jute mills in close vicinity.

While investigating the nature of communal incidents in Telenipara, one should keep in mind that Telenipara has a long history of communal tension and occasional riots involving mainly the population of non-Bengali origin.

A team from APDR Hooghly District Committee visited the Telinipara area on 14.05.2020, 17.05.2020 and 23.05.2020 to find the probable reasons behind the clashes, the nature of violence, the extent of loss in the violence, the perpetrators involved, the role of administration and incidents of right violation by both the state, and non-state players.

The team visited Mokram Ali Lane, a Muslim mohalla and talked with the residents. It was learnt from them that after the outbreak of COVID-19 virus, the movement of Muslims in the neighbourhood area, their going to market, shops for purchase of groceries, daily necessities were gradually faced objection from some people of the Hindu community on the ground that Muslims in general had been instrumental in spreading the said virus in India and so they should not roam around. They said that situation worsened with the news of a suspected COVID-19 Muslim patient in Mokram Ali Lane, though according to some sources, such as Indian Express report, the number of such patients was more. However, residents of Mokram Ali Lane stressed that the only patient actually had asthma having serious respiratory problem but was eventually tested negative. And it was learnt that with spreading of news of COVID-19 patient/patients in Mokram Ali Lane, one Muslim woman was asked to refrain from fetching water from a Municipal tap placed in Gobindamoyee devi Lane on 10th May, 2020 morning and such incident occurred elsewhere also, Muslim residents of Pikepara Mill lines faced opposition from Hindu neighbours in using  community toilets, Muslim men were stopped from stepping into adjacent Hindu dominated area having the local market and finally entries to Muslim mohallas were barricaded. Altercations begun, tension grew.

On 10th May, Sunday, some Muslim miscreants ransacked Hindu shops and households at F.G Street and B.B Lane merely a stone’s throw from the Telinipara Police outpost (which had been infamous as killing-spot of Bhikhari Paswan) at F.G street. Retaliation in the form of terrorising and ransacking Muslim shops and household started soon. However, tension did not escalate further. Both the warring parties restrained themselves holding their forts without any police intervention.  At 10 P.M of 10th May, 2020, a resident of Telenipara informed a member of APDR that he had not seen a single police man in the disturbed area during the whole day, which was also corroborated by all the persons APDR met on 14th and 17th May, 2020. It was learnt that police visited disturbed area at the dead of the night.

On 11th May, 2020, Police patrolled the affected area and posted few police personnel at some places of Telenipara area. No untoward incident happened during the day. The local B.J.P M.P Smt. Locket Chatterjee was not allowed to enter Telenipara. It was alleged that her statement, after police stopped her at Chandannagar on 11th May, 2020, targeting the Muslims residing in Telinipara area on deliberately spreading Corona Virus and blaming that the State administration had been doing nothing to take action against those Muslims, which went viral in social media, instigated the violence against Muslims.

On 12th May, 2020, a concerted attack by the Hindu miscreants on the Muslim households and shops on the periphery of Muslim mohallas adjacent to Hindu areas started at around 12 noon and continued for more than two hours. APDR Team has seen that several dwelling units and shops  belonging to minority  communities  in the Mokram Ali Lane, F.G Street by lane, F.G Street by Rajabazar lane, F.G Street Neogi Bagan by Lane, Garer Dhar have been destroyed by bombing and setting on fire. It was seen that all the belongings in the rooms were charred by fire. It was alleged in several cases before setting the rooms on fire, valuables were looted by miscreants. Totos (E-rickshaws), motorbikes, Small commercial vehicles known as ‘ Chhota Hati‘ etc., whatever found parked around those dwelling units and shops were set on fire. In some cases, evidences were found that gas cylinders were made to blast in the room, Petrol bombs were abundantly used and brick bats and broken pieces of alcohol bottles were laying everywhere. Cable lines were burnt in the area; Cows/buffalos were allegedly looted from cowshed. APDR team spotted one live bomb on the roof of the house of Abdus Salam, at Neogibagan By lane on 14th May, 2020. It has also been alleged that miscreants had accompanied the police team when police entered the area after the said attack.

It is alleged that attack on Muslim households and shops were done by outsiders, especially from Barrakpore, guided by local miscreants. Residents of Bhadreswar Station Road and Library Road informed the APDR team that many unknown face had been seen roaming in those areas during the day on 12th May, 2020. A scooter loaded with bombs was found abandoned on Dawrik Jangal Road at Maniknagar on 12th May, 2020, which Police retrieved on 13th May, 2020.

On 12th May, 2020, at Pikepara, Lines of 9,10,11,12 of Shyamnagar North Jute Mill were totally vandalised except a wing each of Line no, 10 and 11 inhabited by hindu mill workers. At JPN Street of Pikepara, a shop belonging to a Hindu and an office of Bengal Chatkol Majdur Union were ransacked by Hindu miscreants. Some houses belonging to Muslims situated opposite to the community toilet on the way from Line No. 1 to Line No.9 were totally gutted by fire. Black fumes are still emerging from the gutted rooms on 17th may, 2020.

were injured in the attack at the Pikepara Jute Mill Lines on 10th May Evening. They both were treated

On 17th May, 2020, one person name Md Abdus Salam (name changed) alleged that the management of Shyamnagar North Jute Mill is refusing work to the Muslim labourers of that mill.

A well-respected Haji Baduriddin Saheb Majar  situated at Babubazar, G.T Road and another Majar situated at Hindustan Park, Bhadreswar as well as a Shitala Devi Mandir situated at F.G Street were ransacked.

On 12th May, 2020, at around 12 Noon, in retaliation to the Hindu attack on Muslims, Muslim miscreants set on fire some shops and houses belonging to Hindus at B.B. Lane and F.G Street but Muslim shops at the opposite sides of the Street/Lane remained unscathed without suffering any damage. None of Hindu victims complained of involvement of miscreants from outside of Telenipara.

Hindu Victims numbering 55-60 persons including children of F.G Street and B. B Lane have been sheltered at nearby Jubilee Primary School on 10th May, 2020 night, whereas Muslim victims mumbering more than 600 persons including children of Line Nos. 9, 10, 11 and 12 of Pikepara have taken shelter at Haji Md. Mohsin Primary School and Md. Mohsin Primary School on 10th May, 2020 night. It was alleged that Bhadreswar Municipality, while rightly extended help for Hindu victims sheltered in jubilee Primary School, did not do so for the Pikepara Muslim victims sheltered in two primary schools.

The area around from Dinemardanga More (junction) to Gondalpara Jute Mill under the jurisdiction of Chandannagar P.S did not experience any sort of untoward incident.

Sporadic incidents of Muslim properties being ransacked/looted/put to fire in different places far away from Telinipara under Bhadreswar PS such as Babur Bazar, Mankundu etc.

As per available report, police made 129 arrests of males and females both in Muslim and Hindu areas. In many cases, arrests were arbitrary and baseless such as follows:

Several victims complained that Bhadraeswar P.S had refused to accept F.IRs/G.Ds in relation to loss of property/ violence. Highhandedness of RAF and police personnel with the local residents and arbitrary arrests instilled a fear psychosis in the area. As a result residents faced distress as Vegetables Vendors, Milk Van etc. could not enter the Muslim area as on 15th May, 2020.. Police and RAF personnel patrolling in the area and persons wounded from bomb splinters dares to go for treatment fearing that they might get arrested.

1. The epicentre of 10th May, 2020 incident was in and around F.G Street. Muslims of in and around F.G Street including Mokram Ali Lane etc. area had been gradually cornered and stigmatised with regular blocking of them in their normal movements by neighbour Hindus alleging Muslims of spreading of Corona virus and in the fasting period humiliation on denying entry to community toilet or fetching water from tap had been the proverbial ‘straw on the Camel’s back’ and the first move in the direction of communal violence was made by the Muslims on 10th May, 2020.

2. Though Telenipara has long history of communal tension and riots, sometimes continued for a period, current violence has a unique feature of resurfacing again on the third day after a lull day with participation from outside elements with a clear strategic planning. From the nature of attack on 12th May, 2020 by Hindu miscreants, it can be concluded that principle object of said orchestrated attack was to cripple the minority community economically, rather than inflicting bodily injury.

3. There was no clear evidence of Muslims involved in violence in areas other than F.G Street and adjacent areas. No Muslim miscreant from outside Telenipara was found involved in the incidents of attack on Hindu properties.

4. As understood from the course of events by APDR Team, police has choosen to remain passive spectator in the drama of violence. Had the police been more active and alert after the 10th May, 2020 incident, the greater loss of properties could have been easily avoided. The local police and Intelligence had failed miserably, if not deliberately, understanding the ground reality.  Transfer of Officer-in-charge, Bhadreswar P. S. to North Bengal confirmed this observation.

One aged Muslim woman trying to protect the shop of Sri Bijoy Show being ransacked and looted expired. An ex-councillor named Gabbar talked to the Muslim and Hindu leaders of his area, pacified them and no untoward incident happened in Buro Dewantala. At Pikepara, the Khatal Owners (hindu goalas) successfully resisted the Hindu miscreants from entering the line no. 1 and surrounding areas of Paikpara